James Barnett is one of those people of which I am proud to say, “I know him!”

And yet, as much as I love this guy, I hate reading his tweets. I hate them because they convict me. James is the kind of Christian that is really living this Christian life; not just talking about it.

I ran into James one day a few years back as my husband and I took a walk at a local park. He was sitting on a picnic bench, staring into space with a journal on his lap. We chatted briefly, and I couldn’t help but notice that he seemed troubled. Later I found out why.

James grew up in a Christian home, went to church and followed all the rules. He went to college and landed a job with an almost six-figure salary. Although a faithful Christian with some great things happening in his life, something was missing.

During a mission trip to Nicaragua, his life was forever changed. There, in the middle of a dump, he met a prophetess named Mrs. Ruby. She lived among the people at the dump, praying over them.

Kneeling before her, she poured oil on his head and spoke in tongues. Then she spoke these words:

Child, the Lord wants you to know you haven’t been obedient.

He was a bit upset at this, as he’d been a good Christian all his life. How had he not been obedient?

These words stuck with James, and he made a radical decision that still amazes me. He quit his job, sold all his possessions and began to live on the street with the homeless. Living out of a van, he did his best to serve the displaced and downtrodden that crossed his path every day.

He gave out clothing, but soon ran out. As a graphic design major, he designed a t-shirt that simply said: Clothe Your Neighbor as Yourself. He began to sell them, giving all the profits back to the homeless. That simple t-shirt design has grown into an official non-profit and the word is spreading. I even saw one in Nashville, walking into a Cracker Barrel! 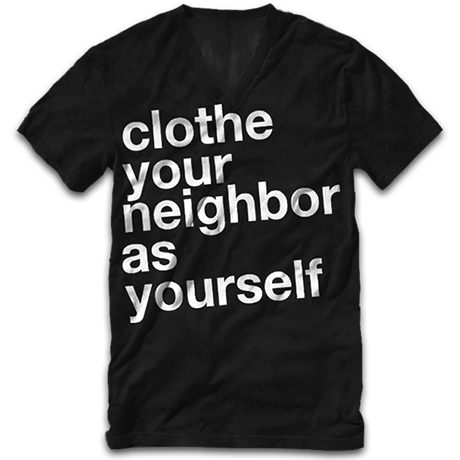 After his time on the streets, James worked as a youth pastor. But he has once again been called to live on the streets. This week, he will move to Atlanta and minister to the homeless while he continues to run Clothe Your Neighbor as Yourself. He tells of his decision to return to the streets here.

James’s willingness to step out on faith inspires me greatly. I am amazed at his bravery, his love and his heart. He is the sort of Christian that I aspire to be. I just don’t know if I have the guts to live out my faith the way he does.

Check out the t-shirts and apparel at Clothe Your Neighbor as Yourself. Also be sure to read James’s blog, or follow him on Twitter. I also recommend booking James to speak at your church or organization. He will definitely convict and challenge you.

Do you know someone who is worshiping behind the scenes? Leave a comment or shoot me an e-mail via the contact page. I’d love to share their story.

4 Replies to “Behind the Scenes Worship: Clothe Your Neighbor as Yourself”